Major stock markets saw a sharp dip Wednesday after investors were handed a dose of reality on the COVID-19 pandemic, but there were still a handful of penny stock gainers that are worth watching this month.

The Dow Jones Industrial Average fell close to 600 points, while the Nasdaq Composite and S&P 500 fell nearly 3% each as analysts chimed in on what the world can expect post-virus.

The drop came after Federal Reserve Chairman Jerome Powell warned of “lasting damage” to the US economy due to the pandemic and acknowledged the economic recovery may take longer than he, or anyone else, would like, despite continuous stimulus efforts by the Fed. The Chairman also downplayed the need for the Fed to enact negative interest rates.

Despite the doom and gloom, investors will be happy to hear that there are still ample opportunities to find winning stocks. The virus has indeed created some instability in several industries, but there are others who are finally getting their chance to shine.

Whether you want to get in on the next gold rush with gold penny stocks or ride the tech wave with tech penny stocks, there are a ton of hot penny stocks that are killing it.

With that in mind, here are the top four penny stock gainers to watch this month, all of which were up over 20% on Wednesday. 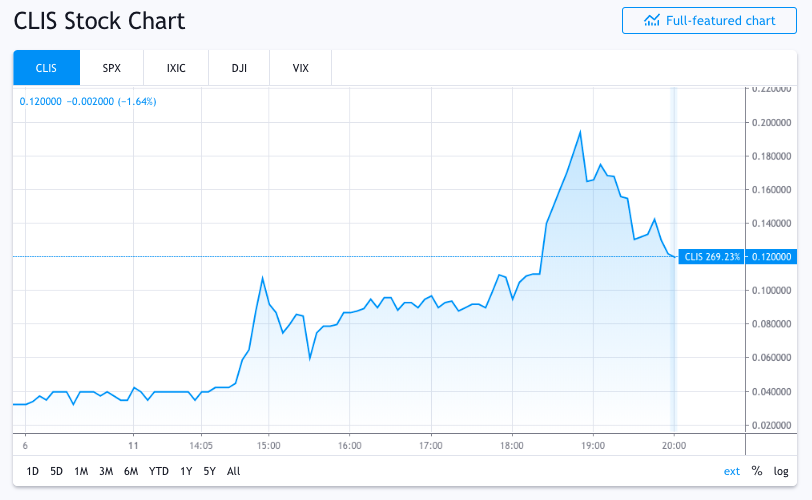 First on the list of penny stock gainers to watch is Clickstream Corp, a technology-based data analytics company focused on a free-to-play mobile app that lets casual users interact with a gaming platform to win real money. The company is also in late-stage development of a fantasy sports analytical service platform, DraftClick.

Clickstream stock shot up 248.57% to $0.12 after the company announced that it signed an agreement with NFL Network Commentator and Former NFL Player Brian Baldinger to host an original digital trivia program on its soon-to-be-released mobile app and digital platform.

On the gaming program, which will be available on both iOS and Android, users will compete and win cash and prizes on Clickstream’s unique social gaming platform.

When the app launches, it will initially focus on trivia games that allow users to get involved in around 20 seconds and then receive results from push notifications. Game types are set up dynamically, with non-live game shows daily and live game shows with live hosts two to four times every month.

With stay at home regulations still in place and businesses closed, consumers are turning more and more toward in-home entertainment, which is very positive for Clickstream and its upcoming app launch.

In addition to the NFL commentator, the company said it intends to work with several other well-known TV personalities and market its gaming platform to a wide range of users. 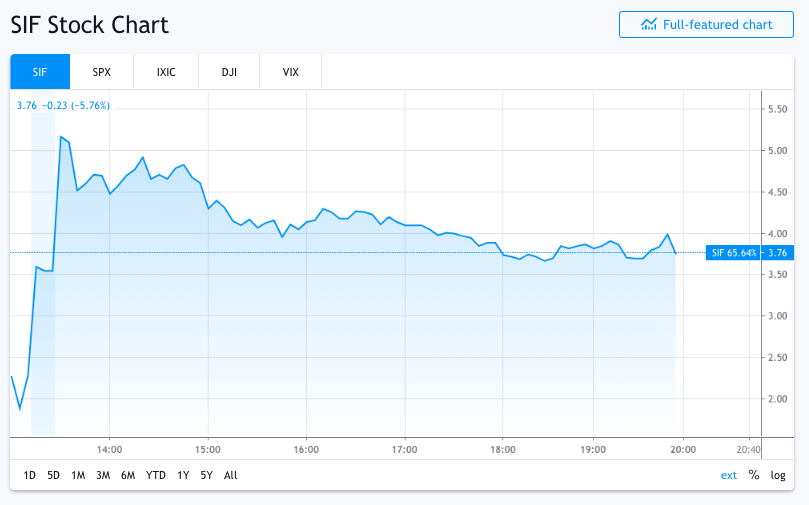 Next on the list of penny stock gainers is SIFCO Industries, a global provider of highly engineered forged components for the aerospace, energy, and defense industries. The company’s stock increased an impressive 87.97% to $4.14 on Wednesday after announcing its Q2 2020 financial results.

“The second quarter was strong in terms of financial performance as we continue to execute on our business strategy,” said SIFCO CEO Peter W. Knapper. “As we move forward in these extremely volatile and uncertain times, we will focus on safely serving our customers first, while aggressively conserving working capital everywhere practical.”

It’s clear that investors were happy about the news as SIF stock reached a high of $5.50, with a whopping trading volume of 17.5 million shares. The volume represents a huge increase from its average volume, which is less than 10,000 shares. 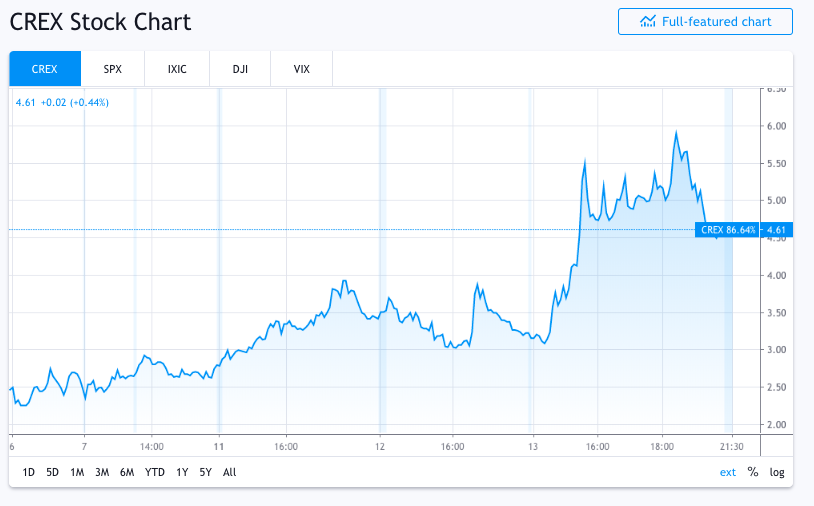 Third on the list of hot penny stock gainers to watch this month is Creative Realities, a digital marketing technologies company that provides a range of marketing technology solutions to its customers through its suite of software applications.

The boost came after Creative Realities announced the launch of its AI-integrated, contactless temperature inspection station ThermalMirror, which will be available immediately.

The company developed its turnkey, plug-and-play solution to address the urgent need for businesses and employers to build consumer and employee confidence as stay-at-home orders are reduced or relieved throughout the US.

“Due to COVID-19, every single vertical we serve is facing the challenge of how to mitigate fears of safely visiting and returning to work, irrespective of industry. Our core business is built around technologies that inspire better customer experiences, and this is the most critical barrier brands and businesses are facing today,” said Creative Realities CEO Rick Mills. “We felt an obligation to assist in addressing this concern, and we believe that the ThermalMirror is an ideal solution.”

The platform delivers a customized experience designed for virtually every commercial use case and has the ability to capture analytics that help businesses meet operational, compliance, and HR requirements.

Investors were evidently enthused about the new technology, as CREX hit a 52-week high of $5.98 on Wednesday, before settling back down to $4.58.

Those interested in CREX stock will want to keep an eye out for the company’s upcoming Q1 2020 financial results, which are being released May 14. 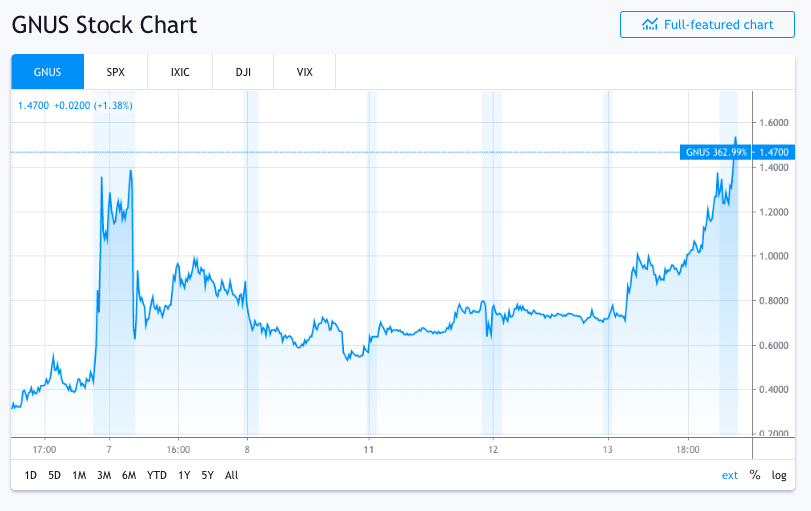 It isn’t surprising to see Genius Brands International on the list of penny stock gainers to watch this month, the global brand management and entertainment company has continued to release exciting news all month.

On Wednesday, Genius Brands International issued a letter to shareholders in regards to the launch of Kartoon Channel!, its new ad-support, free “Netflix for kids” platform, which will be available in over 100 million US households and across 200 million mobile devices. The new digital network is scheduled to launch on June 15.

The company also provided information about its Rainbow Rangers toys from Mattel, based on its hit series on Nick Jr., which will hit Walmart stories in August, beginning with a multipack of Rainbow Rangers figures.

Stock markets may be out of whack right now, but that doesn’t mean there aren’t ample opportunities to trade stocks and experience some serious gains.

Yes, penny stocks are inherently more risky, but they also have the ability to offer some pretty hefty payouts.

Checking out the top penny stock gainers is a great way to find hidden gems, and the aforementioned stocks are a great place to start.

Are there any penny stock gainers you’ve been watching? Tell us about them in the comments!