SAN DIEGO, Jan. 23, 2020 /PRNewswire/ — Leading gaming audio and accessory brand Turtle Beach (NASDAQ: HEAR) today announced a new working partnership with the Chicago Huntsmen CDL Franchise. Owned by NRG Esports and led by Co-CEOs Andy Miller and esports luminary Hector “H3CZ” Rodriguez, The Huntsmen have an incredible roundtable of expertise in the traditional sports and tech industries, with investment from the likes of Shaquille O’Neal, Tiesto, Jennifer Lopez, Alex Rodriguez, and Marshawn Lynch. The Huntsmen are kicking off their first match of the season this weekend at the Call of Duty League Launch Weekend tournament in Minneapolis, Minnesota. 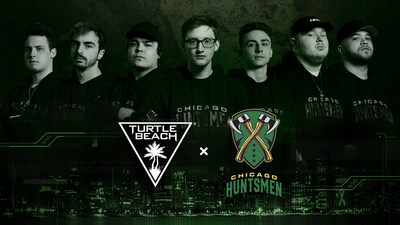 This new partnership continues the years-long collaboration between Turtle Beach and H3CZ, which began with Hector’s first gaming headset back in 2010 and was officially inaugurated in 2016 via partnership with OpTic Gaming, and resulted in multiple world championships in Gears of War, Halo and Call of Duty for teams using Turtle Beach gear, as well as a wealth of engaging and influential content for gamers to consume.

“Hector’s passion for gaming, his ability to create first class, dominant esports organizations, and his engagement with fans are why we love working with him and why we’re excited about this new partnership with the Chicago Huntsmen,” said Juergen Stark, Chairman and CEO, Turtle Beach. “Hector is a pioneer in our industry, as well as a loyal and forward thinking partner and we can’t wait to collaborate with him on future product innovations and activations with the Chicago Huntsmen players, staff, content producers and fans.”

“What can I say? Turtle Beach has been a great partner over the years, so as I build another winning organization with the Huntsmen it’s important that they have the very best equipment,” said Hector Rodriguez, Co-CEO, NRG Esports. “Turtle Beach has been a part of my life in gaming since the very beginning, and I’m excited we get to continue stacking up more wins and creating more amazing content together.”

Chicago Huntsmen is one of the leader’s in Activision Blizzard’s new Call of Duty League. Owned by NRG Esports and led by Co-CEOs Andy Miller and Hector Rodriguez, the Huntsmen have an incredible roundtable of expertise in the traditional sports and tech industries, with investment from the likes of Shaquille O’Neal, Tiesto, Jennifer Lopez, Alex Rodriguez, and Marshawn Lynch. The Huntsmen will be playing their first home matches at the Wintrust Arena in Chicago Illinois April 4-5, 2020. Tickets are available at www.huntsmentickets.com. #bethehunter

About Turtle Beach Corporation
Turtle Beach (www.turtlebeach.com) is a leading gaming audio and accessory brand offering a wide selection of cutting-edge, award-winning gaming headsets. Whether you’re a professional esports athlete, hardcore gamer, casual player, or just starting out, Turtle Beach has the gaming headset to help you truly master your skills. Innovative and advanced technology, amazing high-quality gaming audio, crystal-clear communication, lightweight and comfortable designs, and ease-of-use are just a few features that make Turtle Beach a fan-favorite brand for gamers the world over. Designed for Xbox, PlayStation®, and Nintendo consoles as well as for PC, Mac®, and mobile/tablet devices, owning a Turtle Beach gaming headset gives you the competitive advantage. Hear Everything. Defeat Everyone®. In 2019 Turtle Beach acquired ROCCAT, a leading PC accessories maker that combines detail-loving German innovation with a genuine passion for designing the best PC gaming products. Turtle Beach’s shares are traded on the Nasdaq Exchange under the symbol: HEAR.

While the Company believes that its expectations are based upon reasonable assumptions, there can be no assurances that its goals and strategy will be realized. Numerous factors, including risks and uncertainties, may affect actual results and may cause results to differ materially from those expressed in forward-looking statements made by the Company or on its behalf. Some of these factors include, but are not limited to, risks related to the substantial uncertainties inherent in the acceptance of existing and future products, the success of our marketing partnerships, the difficulty of commercializing and protecting new technology, the impact of competitive products and pricing, general business and economic conditions, risks associated with the expansion of our business including the implementation of any businesses we acquire and the integration of such businesses within our internal control over financial reporting and operations, our indebtedness, the Company’s liquidity, and other factors discussed in our public filings, including the risk factors included in the Company’s most recent Quarterly Report on Forms 10-Q and 10-K and the Company’s other periodic reports. Except as required by applicable law, including the securities laws of the United States and the rules and regulations of the Securities and Exchange Commission, the Company is under no obligation to publicly update or revise any forward-looking statement after the date of this release whether as a result of new information, future developments, or otherwise.

All trademarks are the property of their respective owners.

The gold price hit a 7-year high on Thursday, increasing by 0.9% to $1,626.50 per ounce, following an update from the US Federal Reserve regarding rate cuts.

While the yellow metal has been …

VSBLTY Groupe Technologies Corp. (CSE:VSBY) (OTCPK:VSBGF) stock was up over 8% Wednesday afternoon to US$0.19 on the OTC after successful demos at not one, but two European trade shows in the past week.

Stealth BioTherapeutics Corp (NASDAQ:MITO) made a major announcement today regarding elamipretide, which resulted in a highly impressive rally in MITO stock this morning. A natural history study of elamipretide has revealed that subcutaneous injections of …

In a new development, which has come as a significant boost for ADXS stock, Advaxis, Inc. (NASDAQ:ADXS) announced that it has reached an agreement with Personalis Inc (NASDAQ:PSNL) for a collaboration deal.

Wall Street analysts are sitting up and taking notice of CannaOne Technologies Inc. (CSE:CNNA) (OTCPK:CNONF), a leading software development company in the cannabis space that supplies e-commerce solutions to cannabis markets around the world.

One Stock Has the Solution to 5G’s Hidden Problem

After a decade of development, the fifth generation of wireless communication (5G) is finally becoming a reality in our daily lives. Promising download speeds in excess of 20 times the current capability, this new wave …