Stock markets are opening Friday the 13th by clawing back some of the heavy losses incurred during the worst week of trading since 1987. The coronavirus outbreak has caused chaos for the global economy, with sharp declines in the S&P 500 and the Dow Jones prompting fears that a global recession may be imminent. As we officially enter bear market territory, volatility is everywhere and so penny stocks are now on a par with the rest of the market for once, meaning now is the opportune time to find a few hidden gems with the biggest penny stock gainers.

Penny stocks trade for $5.00 or less, and while they can often represent an excellent chance to turn a small input into a massive return, they are not for the faint-hearted. Here, we’ll look at the five biggest penny stock gainers today that could help your portfolio capitalize on the current market environment.

While you’re here, you might want to check out the five biggest penny stock losers from yesterday. 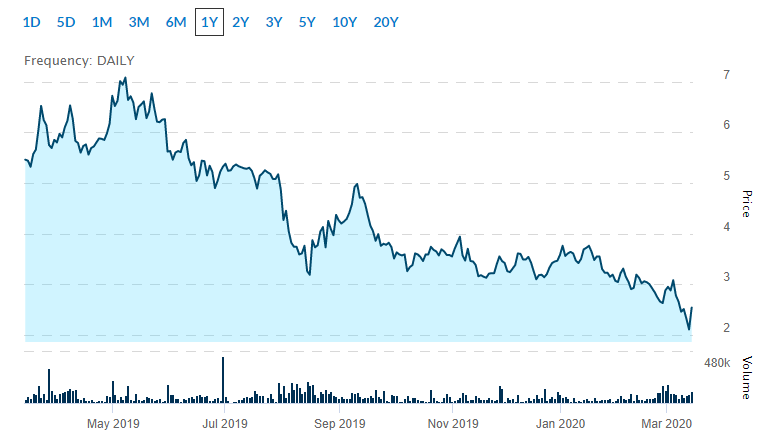 Ramaco is a coal miner with operations in Virginia and Pennsylvania. With a portfolio of four long-lived projects, Ramaco is well-positioned to deliver among the lowest-cost US domestic metallurgical coal to US-based blast furnace steel mills and coke plants, as well as international metallurgical coal consumers, and to capitalize on positive trends in the metallurgical coal market.

According to a Technavio report published just this week, the metallurgical coal market is expected to grow by almost US$15 billion between 2020 and 2024 as demand for steel increases. However, the report also states that slowing investments in the coal industry will challenge this growth and that market vendors should focus more on the growth prospects in the fast-growing segments while maintaining their positions in the slow-growing segments to fully capitalize.

No news has been released by Ramaco over the last year other than its most recent financial and resource reports for 2019, which were released in February. The company saw a 31% increase in adjusted EBITDA to US$55.4 million for the year, which was a new record, while coal production was 110% of the Platts Index, a key metric for mining firms.

Despite these solid results, METC shares fell 30% between February 20 and March 12 to an all-time low of $2.11, most likely as a result of the coronavirus outbreak and an oil price war between Saudi Arabia and Russia. However, today the stock has bounced back over 20% to currently trade at $2.54 with a daily short sale volume of 30.5%, which indicates the stock is rising as a result of short positions liquidating to cover their position. 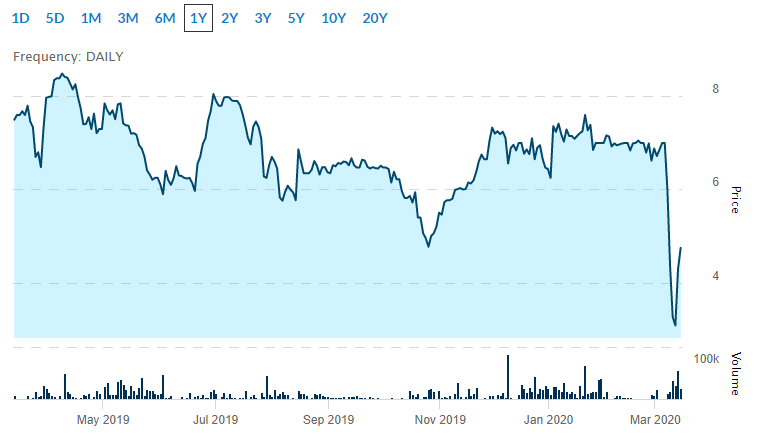 Ranger is an independent provider of well service rigs and associated services in the US, with a focus on unconventional horizontal well completion and production operations. Ranger also provides other services necessary to bring and maintain a well on production. The processing solutions segment of the business is focused on the rental, installation, commissioning, start‑up, operation, and maintenance of MRUs, Natural Gas Liquid stabilizer and storage units, and related equipment.

Ranger actually only fell into penny stock territory last week as oil prices crashed, having only traded below $5.00 twice previously for a brief period at the end of 2018 and again last October, two occasions when oil prices dipped. Trading at $7.00 on March 5, RNGR stock plunged 55% to $3.08 on March 11, before bouncing back to $4.79 after a huge spike in trading volume, with investors likely seeing an opportunity to buy what is a pretty solid stock at a record low price. 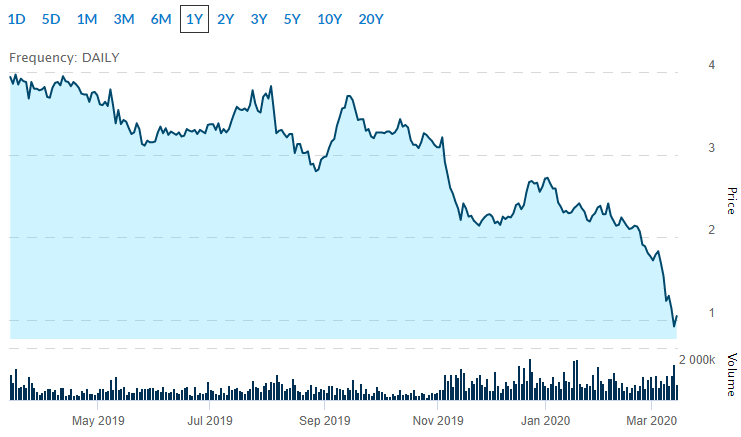 Intrepid is a diversified mineral company that specializes in supplying potassium, magnesium, sulfur, salt, and water products essential for customer success in agriculture, animal feed, and the oil and gas industry. Intrepid is the only US producer of muriate of potash, which is applied as an essential nutrient for healthy crop development, and the company is also a market leader in the use of solar evaporation for potash production, which leads to lower costs and more environmentally friendly production.

IPI stock has been on a downward trend for much of the last year. Trading at $3.54 exactly 12 months ago, this penny stock now sits at $1.06 and saw some of its sharpest drops in recent weeks as the coronavirus spreads to the US. However, IPI has bounced 15% and is one of the biggest penny stock gainers today after an insider suggested that the stock will explode to $8 testing $10 in the next six months. While claims like that have to be taken with a pinch of salt, it did increase interest in the stock, with volume almost doubling between March 10 and 12. 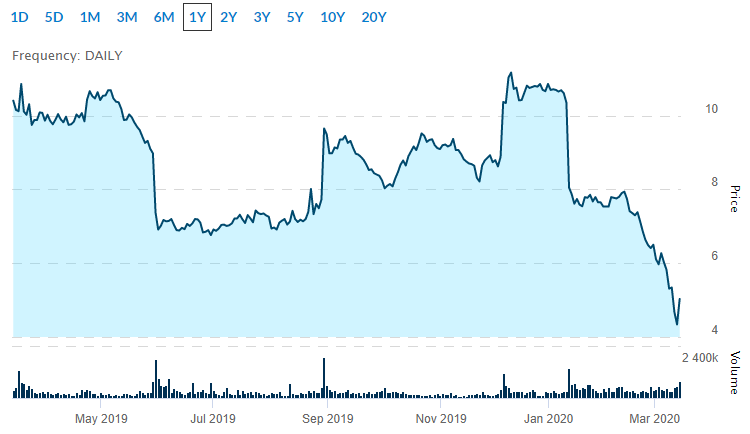 Tilly’s is a leading specialty retailer of casual apparel, footwear, and accessories targeted at young adults and children, with an extensive portfolio of well-known global, emerging, and proprietary brands for an active and social lifestyle. Headquartered in Irvine, California, the company currently operates 229 total stores across 33 states.

Tilly’s stock has been sinking since early January when the coronavirus outbreak began to impact clothing makers due to their supply chain dependence on China and their sales volume there. Opening on January 1 at a price of $10.85, Tilly’s lost more than half of its value up to this week and fell into penny stock territory on March 11.

However, the stock has bounced almost 15% with the release of its Q4 earnings yesterday, which beat revenue estimates. This suggests a short-term flip for speculators banking on an earnings beat, and it looks unlikely that these gains will be sustained in a bear market, with demand for premium clothes labels likely to be one of the biggest casualties of a recession. 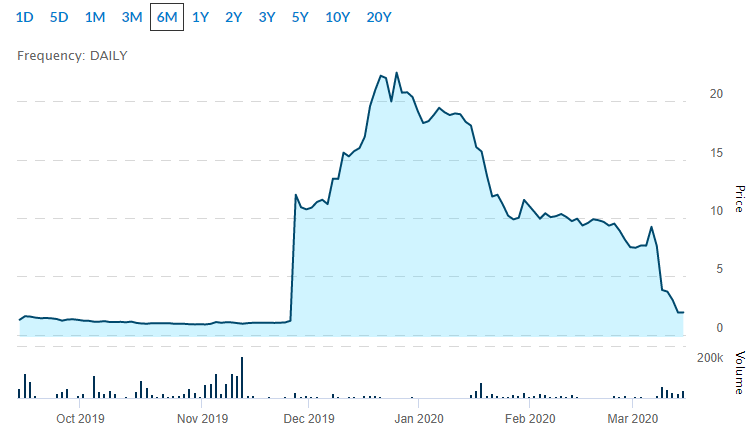 Sundance Energy is an independent energy exploration and production company located in Denver, Colorado. The company is focused on the acquisition and development of large, repeatable oil and natural gas resource plays in North America, with current activities focused in the Eagle Ford Shale in Texas.

This stock saw some really unusual movement last November when it redomiciled from Australia to the US. Trading at just $1.00 on November 21, SNDE rocketed to a peak of $22.47 on December 24, despite a huge drop in volume. While it was never publicly announced, Sundance actually carried out a reverse stock split to trade on the Nasdaq. Since then, SNDE stock has tanked back into penny stock territory after its CEO told investors the US move would lead to slower growth and, ultimately, production declines, and that was before the fall in oil prices.

SNDE stock has popped around 7% today and now trades at $2.03 after the company announced its current hedge book, covering a total of 7,931 barrels of crude oil per day (or 2,181,000 barrels total) at a weighted average floor price of US$54.08 per barrel, despite oil prices currently hovering at just above $30 per barrel. The company is also slated to release its Q4 earnings on March 16, which could help sustain the bullishness in the face of falling oil prices.

So, there you have the five biggest penny stock gainers on March 13. In some cases, there is real potential for these stocks to actually thrive, despite the challenging economic conditions, while in others, the upward movement is the result of short squeezing or short-term news unlikely to sustain the stock in a bear market. Regardless, the current environment offers opportunity aplenty for investors in penny stocks with the right combination of timing and insight.