Rutherrin® mediated Photo Dynamic Therapy improves cancer specific immune responses by switching the so called “Don’t eat me” signal that cancer cells use to trick the immune system into the “Eat me” signal on treated human glioblastoma cells, a relevant cell model of Glioblastoma Multiforme.

TORONTO, ON / ACCESSWIRE / November 30, 2018 / Theralase Technologies Inc. (“Theralase®” or the “Company“) (TSXV:TLT) (OTCQB:TLTFF), a clinical stage pharmaceutical company dedicated to the research and development of light activated Photo Dynamic Compounds (“PDCs“) and their associated drug formulations, used to safely and effectively destroy various cancers, announced today that Theralase’s Rutherrin® Photo Dynamic Therapy (“PDT“) has been shown to increase its efficacy in cancer treatments, inducing a cancer specific immune response, by switching the so-called “Don’t eat me” signal to an “Eat me” signal on treated human glioblastoma cells. This switch in cellular signalling improves the uptake of treated cancer cells by immune cells, such as: Antigen Presenting Cells (“APCs“) (i.e.: macrophages and dendritic cells). APCs are a part of the immune system, with a primary responsibility of destroying foreign cells, such as bacteria and viruses, while also destroying dead and dying cells such as cancer cells, if they are able to detect them.

Rutherrin® PDT’s mechanism of action was evaluated in human glioblastoma cell lines, a relevant cell model of Glioblastoma Multiforme (“GBM“), a deadly form of human brain cancer. As previously disclosed in earlier pre-clinical studies, Rutherrin® mediated PDT had a significant increase in survival over untreated controls and also over Aminolevulinic Acid (“ALA“)-PDT treated rats. It was shown that there was a significant increase in the infiltration of cancer specific CD8+ T cells that kill cancer cells.

To further evaluate the mechanism of CD8+ T cells infiltration, Theralase researchers quantified the effect of Rutherrin® PDT on the so-called “Don’t eat me” versus “Eat me” signalling of cells. Expression of the CD47 molecule on cancer cells protects them from destruction by the immune system and is associated with the “Don’t eat me” signal; thus preserving dangerous cells and inhibiting the immune response. On the other hand, expression of extracellular calreticulin (“CRT“) is associated with the “Eat me” signal; thus, improving cancer cell uptake by APCs, potentiating a cancer specific immune response. Therefore, development of therapeutic strategies that enable downregulation of CD47 expression and up-regulation of CRT signalling is desirable to improve clinical outcomes of cancer patients.

Data obtained in human glioma cell line U87 showed that more than 40% of the dying cells in a Rutherrin® PDT treated group show extra cellular expression of CRT (“Eat me” signal), compared to less than 20% of cells in controls (untreated). 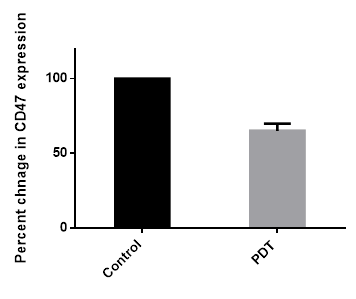 Arkady Mandel M.D., Ph.D., D.Sc., Interim Chief Executive Officer and Chief Scientific Officer, Theralase remarked, “Cancer can often evade the immune system by sending signals that trick the immune system into thinking that the cancer cells are healthy cells and that they should be ignored. One of these tricks involves a cellular signaling pathway that presents a “Don’t eat me” signal to the immune system that tricks the immune system into not engulfing and destroying the cancer cell. We discovered that Rutherrin® PDT overcomes this cellular signalling trick, which will allow APCs to see cancer cells for what they really are and to detect and destroy them. Moreover, the recent experiments have discovered that in addition to suppressing the “Don’t eat me” signal in treated human glioblastoma (brain) cancer cells Tharalase’s anti-cancer PDT technology programs the immune system to seek and destroy cancer cells via upregulation of the “Eat me” signal in PDT treated cancer cells. Using a two-pronged therapeutic approach and targeting both pathways at once could prove very effective in clinical development of Rutherrin® PDT and holds huge potential in the war on brain cancer and on cancer in general.”

There are an estimated 24,000 new cases of malignant gliomas diagnosed in the US annually, with more than 14,000 deaths each year. In the majority of cases, patients experience recurrence following initial treatment. This is especially true for GBM, the most common and lethal form of brain cancer. As a result, most patients do not survive beyond two years post diagnosis.

Theralase® is a clinical stage pharmaceutical company dedicated to the research and development of light activated Photo Dynamic Compounds and their associated drug formulations intended to safely and effectively destroy various cancers.

Additional information is available at www.theralase.com and www.sedar.com.

CALGARY, Alberta, Feb. 08, 2019 (GLOBE NEWSWIRE) — Voyageur Minerals Ltd. (TSX.V:VM) (the “Company” or “Voyageur”).  At the request of IIROC the Company wishes to clarify and retract certain disclosure in the news release disseminated …

With Optimism Rising and the Dollar Declining, Could This Be a Perfect Storm for Silver?

The US Federal Reserve continues to print money and cut interest rates in an effort to buoy the economy above the tides of the ongoing global pandemic. As a result, the dollar is declining at …

The silver price per ounce is continuing its march towards $18.  Silver demand is continuing to rise, fueled by new applications like 5G infrastructure, electric vehicles (EVs), smart electronics and solar energy panels as well …

Silver prices are surging, making the metal one of the best-performing assets in the markets in the Q2, and could continue rising as supply constraints put further pressure on the market. Global metal production has …

The silver price is gaining traction, bringing the gold-silver price ratio down from historical highs and creating a ton of buzz around the silver market. It seems that silver is starting to catch up with …