The growing global demand for strategic energy metals like vanadium paired with the dwindling global inventory has put the spotlight on resource companies developing new projects of this kind, indicating a steady demand for the metal. One company that is focused primarily on the exploration and development of vanadium projects in Canada is the newly listed micro-cap resource company Delrey Metals Corp. (CSE:DLRY) (OTC:DLRYF).

The prospecting program was focused on the strongest magnetic anomalies at the three properties that were mapped out during the Phase I airborne magnetic surveys completed last month by Delrey. Those results outlined sizeable magnetic anomalies on all three properties and allowed the company to increase the size of the Porcher property from 3,122.16 to 3,525.46-hectares, and the Star property from 3,646.8 to 4,618.3-hectares.

“The Delrey team is very pleased with our Phase II results as the assays not only show excellent continuity with the previous Phase I geophysical anomalies, but include some impressive vanadium, iron and titanium grades,” said Delrey Metals CEO Morgan Good.

Delrey Metals has now submitted five-year area-based permit applications which will allow the company to establish up to 40 drill sites on the three properties. 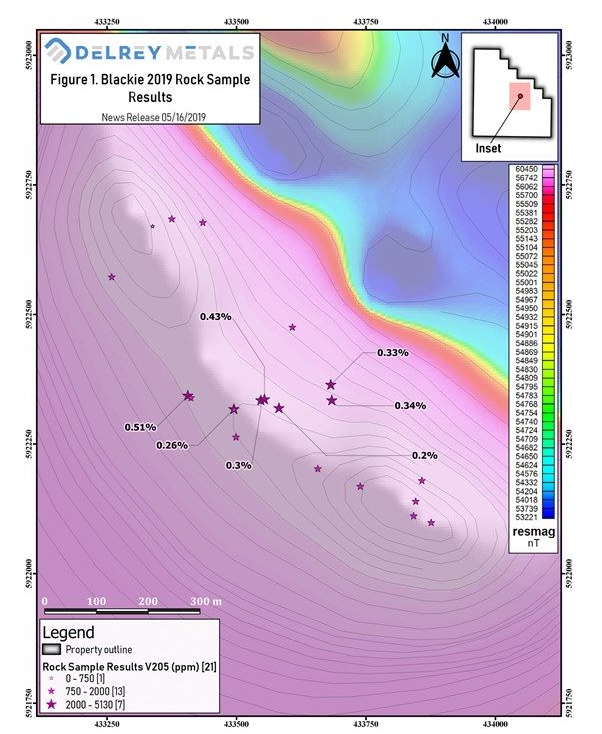 Porcher’s selective historic concentrate grades assayed as high as 0.84% Vanadium Pentoxide over the recently-expanded 3,525-hectare property. Selective outcrop samples from the Phase II program resulted in up to 0.422% Vanadium Pentoxide, with 11 of the 61 rock samples returning >0.20% V2O5 along a strike length of 1 kilometer. 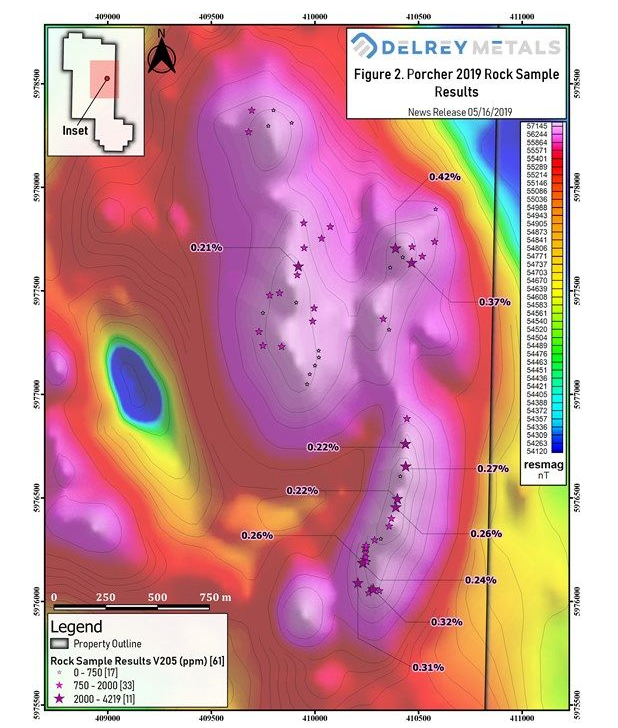 Meanwhile, assay results from the Star property showed 11 of the 43 selective outcrop samples returning >47% Iron (up to 61.2%) from exposed northwest-southeast oriented semi-massive to massive magnetite outcrops along a strike length of about 4.7 kilometers.

While there have been a number of substantial upgrades on vanadium operations in Brazil and South Africa, the newest vanadium projects arising in Canada are also looking very promising. With its mining-friendly jurisdictions and prolific potential vanadium deposits, it makes sense why Delrey Metals has chosen to focus on projects in Canada.

The expansion at the Blackie, Porcher, and Star properties followed by the positive Phase II results further solidify the potential of the company’s Canadian vanadium operations.

On the other side of the country, Delrey’s massive Four Corners project in Newfoundland, which has been dubbed “one of the largest and most accessible vanadium projects in North America,” is another impressive vanadium property that is garnering attention in the vanadium sector.

Delrey Metals also announced Thursday that it has been working diligently to finalize negotiations with Triple Nine Resources for the option to earn 80% of the Newfoundland-based Four Corners project. The flagship project is base on 5,157 hectares and contains Vanadium-Iron-Titanium showings across a potential 12-kilometer strike-length—with selective outcrop samples of up to 56.92% Iron, 15.13% Titanium and 0.39% Vanadium Pentoxide.

Investors will no doubt be keeping an eye on news regarding the definitive agreements for the Four Corners Project and what the company will be doing next at Blackie, Porcher, and Star.

Analysts from multiple sources are offering positive recommendations for Delrey Metals (CSE:DLRY) (OTCPK:DLRYF), a junior resource exploration company with several promising vanadium projects in Canada, including one that is considered “one of the largest and …

Vanadium has received a lot of attention in recent years, with increased demand from China and the emerging Vanadium Redox Flow Battery (VRFB) market. At present, China is the leading producer with an output of …

Why Delrey Metals is Positioned for the Growing Renewable Energy Market

The global renewable energy market is expected to soar in the next five years and Delrey Metals Corp. (CSE:DLRY) (OTCPK:DLRYF) is one junior resource exploration and development company that is looking to meet the growing …

The company revealed the plans for its …

How Delrey Metals is Capitalizing on the Increasing Demand for Vanadium

The vanadium market has gained a lot of attention in recent years due to new national standards for rebar in China, as well as growing demand for products like the Vanadium Redox Flow Battery (VRFB). …

As the global demand for vanadium continues to rise, investors interested in the energy metals space are keeping an eye on which mining companies will be able to meet the growing need of the market.  …

1) The author of the Article, or members of the author’s immediate household or family, do not own any securities of the companies set forth in this Article. The author determined which companies would be included in this article based on their research and understanding of the sector.

4) The Article does not constitute investment advice. Each reader is encouraged to consult with his or her individual financial professional and any action a reader takes as a result of the information presented here is his or her own responsibility. By opening this page, each reader accepts and agrees to Market Jar Media Inc.’s terms of use and full legal disclaimer as set forth here. This Article is not a solicitation for investment. Market Jar Media Inc. does not render general or specific investment advice and the information on Microsmallcap.com should not be considered a recommendation to buy or sell any security. Market Jar Media Inc. does not endorse or recommend the business, products, services or securities of any company mentioned on Microsmallcap.com.

5) Market Jar Media Inc. and its respective directors, officers and employees hold no shares for any company mentioned in the Article.