Russian Import Sanctions: Aluminum price hit a six-year high after US sanctions on Russian producer, Rusal, opened the potential for a huge gap in supply and demand dynamics. Donald Trump has been supporting the aluminum industry by imposing higher tariffs on imported steel and aluminum products from different countries, including China.

The rivalry between Russia and the rest of world over the Syria crisis has forced US and Western countries to impose a complete ban on Russian aluminum. 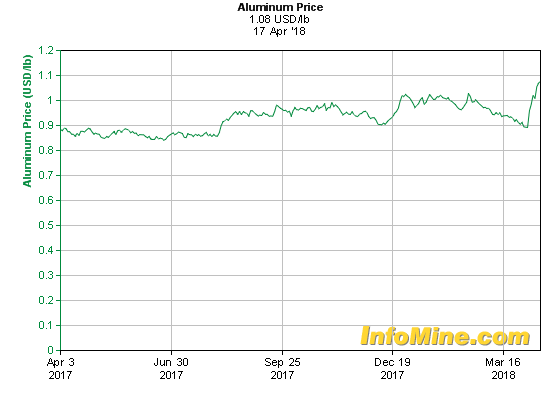 Russia has been one of the biggest importers of aluminum to the U.S. in the last couple of quarters. According to the US Geological Survey, the US domestic production stood at almost 741,000 tonnes in fiscal 2017, while it imported 6.2 million tonnes from other countries and Russia accounted for 700,000 tonnes of total imports.

“We have a potential scenario where U.S. and European markets will be shut off to Rusal, and they’ll be forced to redirect units to clients in other markets,” Deutsche Bank metals analyst Nicholas Snowdon tells Bloomberg. “There’s clear potential that [Rusal] will have to cut production.”

Kaiser Aluminum And the Rest of Industry is Flying Higher

Shares of Kaiser Aluminum Corporation (NASDAQ:KALU) rose sharply higher since the start of this month, driven by tariffs and sanctions on imported aluminum.  KALU stock trades around $107 a share, up 7% in the last week alone.

The US-based Kaiser Aluminum produces and sells semi-fabricated specialty aluminum products, primarily to industrial customers in the United States and Canada. The company is likely to benefit from higher aluminum prices. Kaiser stock has the 52-week trading range of $77 to $116 a share – with the market capitalization of $1.8 billion.

>>Valeritas Announces Release of V-Go Product in Australia and NZ

The company achieved record shipments and near record margin and adjusted EBITDA last year, while the company expects to extend the momentum amid substantial improvement in prices. Century Aluminium Company (NASDAQ:CENX), Alcoa Corp (NYSE:AA), and Constellium NV (NYSE:CSTM) are among the most prominent gainers over the last week, supported by improving market fundamentals.

The silver price is gaining traction, bringing the gold-silver price ratio down from historical highs and creating a ton of buzz around the silver market. It seems that silver is starting to catch up with …

The coronavirus is on everyone’s minds—anxieties, fears, panic. Due to its virulence, we’ve seen the focus on climate change decrease for many—at least, in comparison to when Greta Thunberg first made her thought-provoking speech at …

The company just announced that it …

2020 Mining Trends: How to Succeed in the Future

The mining industry in recent years has transformed in many ways, mainly in an attempt to bypass volatility and disruption.

Disruption in the industry, of course, is still occurring: copper prices have shifted …

3 Canadian Rare Earth Stocks that Could Explode This Year

While the world is distracted by the coronavirus and its potential ramifications, there’s another story from China that should be drawing attention. I’m talking about China’s control of rare earth elements and the incredible potential …

Vanadium has received a lot of attention in recent years, with increased demand from China and the emerging Vanadium Redox Flow Battery (VRFB) market. At present, China is the leading producer with an output of …

Is the Vanadium Price Destined for a Comeback in 2020?

Vanadium had a stellar year in 2018, with prices reaching highs not seen in over a decade. Unfortunately, 2019 took a turn for the worst, and the vanadium price dropped significantly throughout the year.