After another massive drop on Monday, markets have now enjoyed two days of growth. Between yesterday and today, the Dow Jones has gained more than 3,000 points, while the S&P 500 gained 300. Is this a sign that the markets found their bottom on Monday and are now headed for stability or, dare I say, rebound? Time will tell, but no matter what the future holds at large, there will always be pockets of growth that smart investors can play in the near-term. Today, we’re listing some of the top low float penny stocks to keep on your radar.

We’ve already run down the biggest penny stock gainers of the month, as well as highlighted individual sectors like gold and healthcare that are soaring in the era of the coronavirus. All these picks are still worth watching, but looking at low float stocks is more important now than ever.

Low float stocks, as you likely already know, are companies with a low number of shares. These stocks are generally more susceptible to major swings in the market than a stock with a large float. This is because, with fewer available shares, buying or selling activity will have a more noticeable impact on the share price.

Seeing as the markets have been rapidly gaining these days, this is the time for low float penny stocks to shine. No doubt helping things is news of the incoming $2 trillion stimulus deal in the US. As the markets begin to look up, every one of our picks today is in the green by double digits.

However, present volatility means major downturns could still be just around the corner. These picks could potentially suffer major losses, so keep a close eye on them if you do take a position. 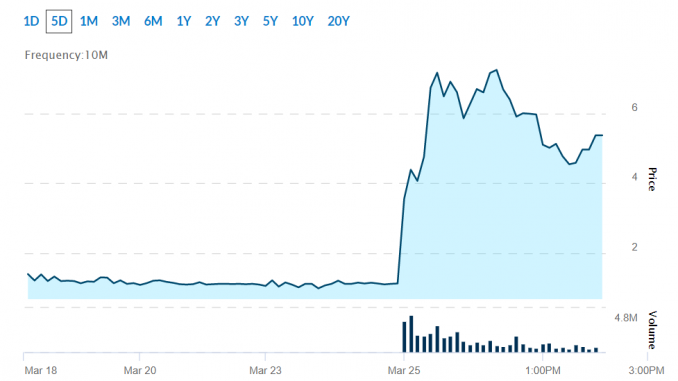 Astrotech Corp is a technology development and commercialization company. Its focus is on launching, managing, and building scalable companies that are based on innovative technology.

Earlier today, shares of ASTC skyrocketed on the news that Astrotech is developing a breath test to screen for lung infections. Notably, that includes the COVID-19 virus and its resulting pneumonia. The company believes its offering can be used at drive-up testing facilities to detect the virus. It would potentially do this in less than a minute, with minimal training required for the administer.

Before the announcement was made, ASTC was trading at $1.12. The stock quickly reached a high of $7.75 before consolidating to its current price of $5.11. This represents 356.25% gains for the day, making it one of the biggest winners of March 25.

The company has 6.55 million shares out and a 3.98 million float. According to its Q2 fiscal earnings report, published on February 13, the Chairman and CEO of ASTC invested $1 million in the company within the last month and a half, bringing his total recent investments to $5.5 million. 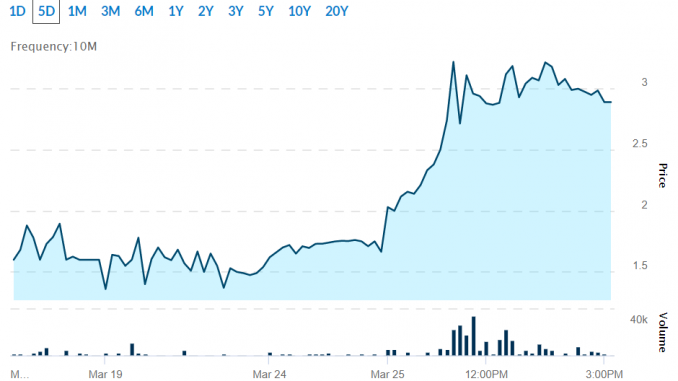 BroadVision is an international software company that provides self-service web applications for online businesses. Its solutions are available globally in the cloud and include enterprise social software, electronic commerce, and customer relationship management.

The timing of the release is to empower businesses during the self-quarantine widely imposed to fight the COVID-19 outbreak. BroadVision’s General Manager of Global Operations, Yun-Ping Hsu, explains:

“By unifying social collaboration, file sharing, task management, knowledge management capabilities, together with email and teleconferencing integration, Vmoso users can get more work done with less, at any time, from anywhere, while turning today’s conversations into tomorrow’s knowledge, automatically.”

BVSN stock leaped 79.72% on the news, rising from $1.66 to $2.99. Over the last year, the company successfully reduced its exorbitant cash burn by 53%, though its operating revenue remains flat.

BroadVision currently has 5.06 million shares outstanding and a 1.67 million float. According to MarketBeat, BVSN has seen $428,000 worth of insider trading this quarter.

Located in Nanping, China, Happiness Biotech Group produces nutraceutical and dietary supplements. The company’s focus is to research, develop, manufacture, and market a variety of products made from Chinese herbal extracts.

Founded in 2006, Happiness Biotech has since established a product portfolio of 32 CFDA-registered “Blue-Cap” supplement products.

Earlier today, the company announced a “breakthrough” in developing testing kits for COVID-19. In collaboration with Fuzhou University, Happiness successfully developed a “colloidal gold testing kit,” which detects the virus through the presence of antibodies.

Currently, the average test—achieved through nucleic acid detection—takes five to six hours. In addition, both the misdetection rate and the cost of the test remain high. Happiness, however, claims that its test is both affordable and has a greatly improved detection sensitivity. The test also reportedly brings detection time down to 10 to 15 minutes.

Happiness Biotech CEO, Xuezhu Wang, says the company is “ready to submit the CFDA certification application next week.” He expects to receive approval quickly, as the CFDA—similar to the FDA—has an emergency approval mechanism in place. 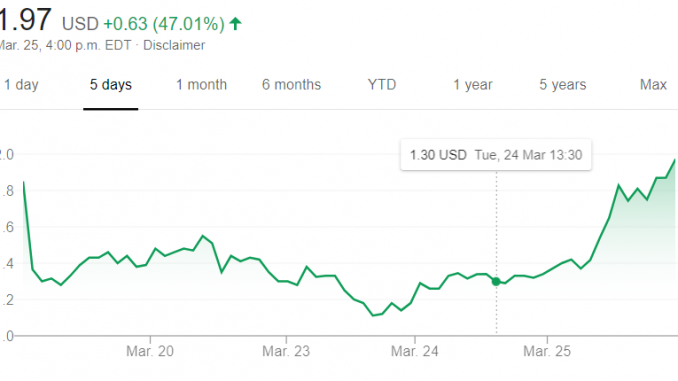 Acer Therapeutics is a pharmaceutical company that focuses on acquiring, developing, and commercializing therapies for serious rare and life-threatening diseases with significant unmet medical needs. The company currently has three drug candidates in the commercial-stage.

On March 18, the company announced that the FDA’s Office of New Drugs (OND) denied a recent appeal that Acer submitted. The company was appealing to receive a positive reply to its New Drug Application (NDA) for one of its proprietary therapeutics, EDSIVO.

In its denial letter to the appeal, the OND detailed certain paths forward that Acer can take to resubmit its NDA for EDSIVO. According to Chris Schelling, CEO and Founder of the company, Acer will be “evaluating [its] possible next steps with the goal of resubmission of the EDSIVO NDA.”

The company remains confident that its current cash position is sufficient to fund operations through the end of 2020. According to Acer’s fourth-quarter and full-year fiscal results, published the same day as the announcement, it ended Q4 with $12.1 million in cash and cash equivalents.

Acer Therapeutics has 14.68 shares issued and outstanding and a float of 7.49 million. According to MarketBeat, the last significant insider trade occurred in Q3 2018, when a Director purchased $4,95 million worth of stock.

Today’s list shares some names with the top momentum penny stocks. This goes to show how quick a low float penny stock can pick up. That is especially true when a lot of capital is re-entering the markets, as we’ve seen all this week.

Remember to do your own research into these picks before investing. And watch them closely, as there’s no telling for certain where they’ll go from here.

Over the past few days, some hot penny stocks have come to the fore, and it could be worthwhile for investors to have a look at many of these stocks. That being said, it should …